This week, the boys in Reception and Little Wetherby welcomed two special visitors to our lovely school: Ricky, the 75 million-year-old velociraptor and young Tina, the triceratops who has only been here for a mere 68 million years. The boys enjoyed finding out all about their different eating habits, including the terms carnivore, herbivore and omnivore and how this affected the dinosaurs’ teeth and method of chewing. We were also fascinated to discover the Latin and Greek origins and meanings of the names of species and how the dinosaurs had popped out of eggs found in China. The boys found the two dinosaurs a little scary at first, but we were all impressed by their obvious bravery, especially those who wanted to stroke our guests. The teachers were mightily relieved that no boys were eaten during the course of the afternoon, despite the fact that Ricky had not yet had his lunch when he arrived! 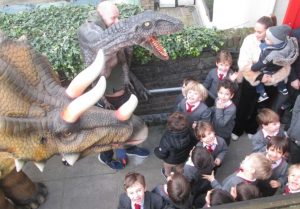